Hi everyone,
As promised I said I’d try to include a recipe each week and I think its important to teach an old dog new tricks especially when that old dog turns up on a weekly basis so today we present you with:
Zucchini and Radish Slaw
Its summer and no one needs to turn the oven on any more then they have to so until the heat goes away (which I hope it doesn’t) I’ll try to include a recipe that doesn’t involve the use of it.
Ok, here we go.
I’ll be honest I’m trying this recipe for the first time tonight but it seems to be too simple to be a bad one. If you're looking for other recipes I’ve picked up a really great book that should be a staple in any CSA members kitchen, it revolves mostly around CSA’s and what you should do with some of those odd vegetables, its called Fresh Food Nation and I bought it at Save-on-foods for $27. I’ve also seen it on Amazon for $16. 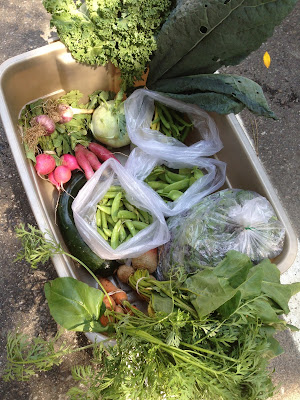